The fourth of July is the traditional start of the Norfolk spot run, and they are here a week early and in full force.

The fourth of July is the traditional start of the Norfolk spot run, and they are here a week early and in full force. Both the Potomac and Patuxent have spot everywhere biting fishbites, bloodworms, lug worms, squid and shrimp bits, and even lowly nightcrawlers. The bigger spot are near the mouths of the rivers. The small and medium-sized spot range up to Benedict in the Patuxent and all the way to the 301 Bridge in the Potomac. Catching them two at a time as fast as you can pull them is not uncommon on moving tides. This is delightful fishing for families as the action is hot. No time for anyone to get bored. The fish are very tasty. The meat is dark and flavorsome.

There are white perch are active and sometimes mixed with the spot. The big perch is a food fish second to none with firm white filets.

Trollers and lure casters continue to catch rockfish in all areas. The Potomac has its closed season for summer protection beginning July 6th. It reopens August 21 and lasts until Dec. 31. The Maryland season closes for the summer period July 16 and reopens July 31.

Hunter House landed his first cobia Friday on a live eel chummed up near Smith Point.

The Patuxent is loaded with spot. Now is the time to go get them.

Cobia fishing is improving with fish now being caught below the Target Ship and on the Mud Leads. The best is still from Smith Point to Tangier. But there are more sightings and catches closer to buoy 72 daily.

A school of bluefish were between 72 and 72A late last week with groups of 3 to 4 pounders, and 12 to 16 inchers scattered about. There were gone by the next day, moving up the bay. Their replacements should be here by the time you read this.

I caught the first three puppy drum in a Patuxent creek while casting for perch. The reds were about 8 inches. They grow fast.

Capt. Bernie Shea has his parties catching spot two at the time in the Patuxent.

Catfish are plentiful and eager in the northern regions of the rivers. They love fresh alewife chunks.

Crabs got off to a slow start and got lots of bad publicity. But they have taken off now and seem to be big and plentiful. Who knew?

Summertime and the living is easy; fish are jumping let's go get them!

Eric Packard proves that catfish are on a hot bite on the Potomac in Mellows Bay. 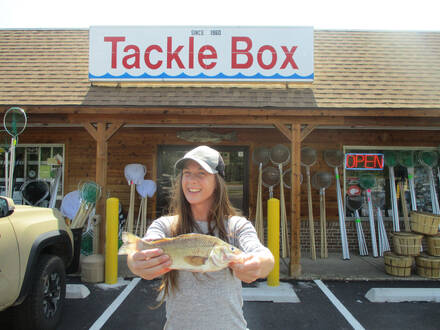