The area features campgrounds, marinas, several restaurants, and a resort hotel. Piney Point boasts the Merchant Marine’s Paul Hall Center for Maritime Training. Piney Point Lighthouse, the oldest lighthouse on the Potomac, is now a museum and is located at the end of gazebo-lined Lighthouse Road. Low lying St. George Island at the mouth of the St. Mary’s River is separated from the mainland by a narrow strip of water. This area is a traditional fishing community with newer vacation homes set amidst beach grass. The island boasts a landmark seafood & alehouse, a small resort hotel, and a waterfront campground. Nearby, find a full-service campground with a marina and waterside restaurant.

St. George Island was the site of the first skirmish of the Revolutionary War. During the War of 1812, the British occupied the island twice and burned all houses, took slaves and cut down most of the large trees to be used as ships’ masts and spars. The lighthouse at nearby Piney Point was the first of eleven to be built along the Potomac. Beginning in the 1800s, Piney Point became a secluded summer resort area for Washington luminaries who journeyed down the Potomac via steamboat. Presidents from Monroe to Truman vacationed there. During Prohibition, the surrounding creeks and inlets were rife with bootlegging activities. The area was used as a torpedo testing range during World War II. 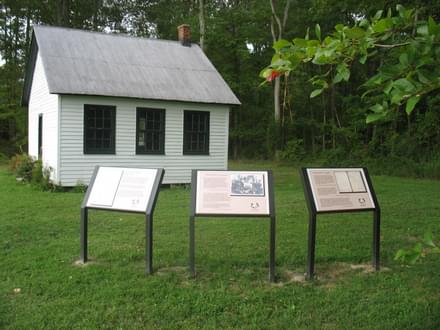 Drayden African-American Schoolhouse is among the nation’s best preserved. Getting there will take you off the beaten path. Wayside markers at the site tell...